Santhi,DMDK MLA Representing Senthamangalam Constituency Calls on J Jayalalithaa at the Secretariat on Wednesday May 29,2013,and now the number of rebel MLAs  tally increases to six.

Santhi, one of the two DMDK MLAs from Namakkal, is the secretary of the party’s district women’s wing. Till 2005, she remained with the AIADMK, after which she joined the DMDK. In the 2006 Assembly elections, she contested unsuccessfully from Senthamangalam 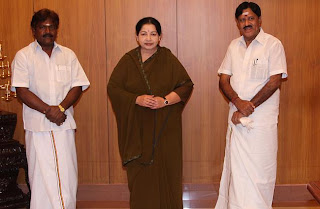 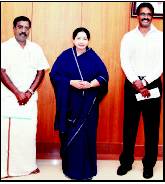 On February 8 ,2013,the Assembly witnessed an unsavoury scene when MLAs loyal to the DMDK leadership got into fisticuffs with the rebel MLAs, who spoke in support of the AIADMK. A month later, six DMDK MLAs were suspended for one year originally, but the quantum of punishment was reduced to six months subsequently
Posted by kmhouse at 12:19 AM