Pune Warriors withdraw from the IPL - Tuesday May 21,2013 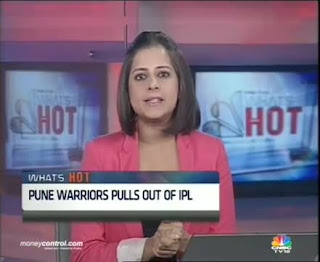 The franchise fee of Rs. 170 crore was to be paid by May 19,2013 and the BCCI moved when Sahara failed to meet the deadline .With the BCCI encashing Rs 137 crore worth Bank Guarantee, the Sahara group, which owns the franchise, decided to pull out of the IPL.This was the third case of the Board encashing the bank guarantee for recovering its dues. It had earlier done so with Kochi Tuskers and Nimbus.

In a statement, Sahara said -

In 2010 Sahara had bid 1702 crore for IPL franchise on the basis of revenue calculation on 94 matches.But we got 64 matches only. We and Kochi Team immediately protested and requested BCCI to reduce the bid price proportionately for viable IPL proposition. Nothing was heard.We continuously requested BCCI for Arbitration from June 2011.But BCCI is only concerned about money and not about the genuine interests of the franchise.BCCI claimed Sahara, had gone back on its word. “We had announced our withdrawal in February 2012 but the BCCI approached us for a solution and requested us to not withdraw