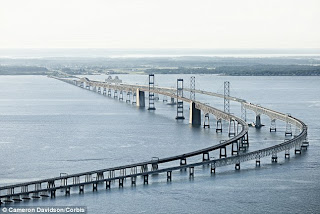 The Chesapeake Bay Bridge (commonly known as the Bay Bridge) is a major dual span bridge in the State of Maryland ,USA

The original span opened in 1952 and, at the time, with a length of 4.3 miles (6.9 km), it was the world's longest continuous over-water steel structure

The parallel span was added in 1973

Officially, the bridge is named the William Preston Lane, Jr. Memorial Bridge after he as Governor of Maryland initiated its construction

The Chesapeake Bay Bridge, pictured, is 5 miles long and stands 186 feet tall at its highest point 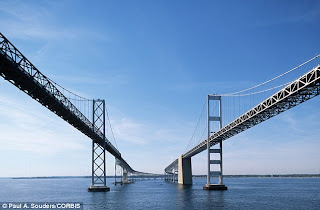 The bridge has been closed 4 times due to extreme weather