German lawmakers approved a bill on Friday  June 30,2017 aimed at cracking down on hate speech on social networks, which critics say could have drastic consequences for free speech online.
The measure approved is designed to enforce the country’s existing limits on speech, including the long-standing ban on Holocaust denial. Among other things, it would fine social networking sites up to 50 million Euros ($56 million) if they persistently fail to remove illegal content within a week, including defamatory “fake news.”
“Freedom of speech ends where the criminal law begins,” said Justice Minister Heiko Maas, who was the driving force behind the bill.
Posted by kmhouse at 11:44 PM No comments:

German lawmakers voted on Friday June 30,2017 to legalise same-sex marriage after a short but emotional debate, bringing the country in line with many of its Western peers. Though Chancellor Angela Merkel voted against the measure, she paved the way for its passage by freeing other members of her party to vote their "conscience." 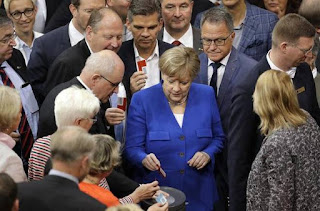 Lawmakers voted 393 for legalising “marriage for everybody” and 226 against, with four abstentions.

Germany has allowed same-sex couples to enter civil partnerships since 2001, but has not granted them full marital rights, which include the possibility to jointly adopt children
Posted by kmhouse at 11:41 PM 1 comment: 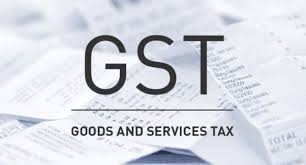 It's taken almost 30 years of discussion and missed deadlines for GST to be finally ready to be flagged off. The introduction of goods and services tax (GST) is called transformative because it is meant to benefit everybody and hurt none.

However, the form in which the tax is introduced in India has many experts worried that it will increase complexity and uncertainty, nullifying any gains. Consumers will have to shell out more for banking services, insurance premium payments and credit card bills with the GST rollout from Saturday July 01,2017 onwards.
Under the Goods and Services Tax, effective Friday midnight June 30,2017, most of the financial services would attract a higher tax of 18 per cent as against 15 per cent as of now.
Posted by kmhouse at 11:20 PM No comments:

Mobile phone bills are expected to go up while recharges would yeild less talktime for prepaid customers from Saturday onwards under the new GST tax regime.

Under the Goods and Services Tax (GST), telecom services would be taxed at 18 percent compared to 15 percent currently.

This means that a user would get a talktime of about Rs 80 on a recharge of Rs 100, compared to about Rs 83 earlier.
Similarly, costs for postpaid users would also go up to the extent of three percentage points. So, for a monthly usage of Rs 1,000, users will have to pay Rs 1,180 instead of Rs 1,150 currently.
Posted by kmhouse at 11:18 PM No comments: 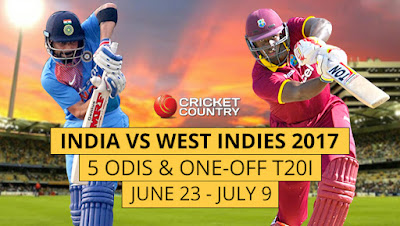 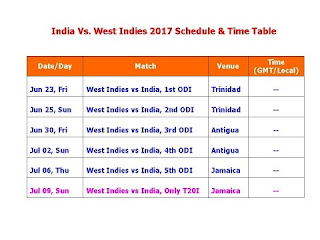 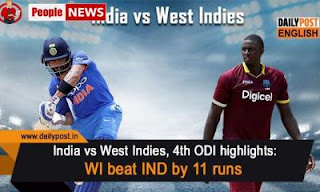 But Ajinkya Rahane and MS Dhoni then came together and stitched a 54-run partnership together. It was a rather slow partnership, and took them 18.1 overs to make 54-runs.
M S Dhoni played a rather slow innings, making 54 off 114 balls. 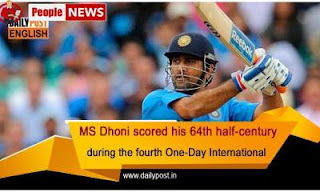 After scoring his 64th half-century in the fourth ODI in Antigua, Dhoni took his international runs tally to 15581 (ODIs: 9496, Tests: 4876, T20Is: 1209). While Gilchrist has scored 15461 runs in his illustrious international career (ODIs: 9619, Tests: 5570, T20Is: 272)However, Dhoni may have overtook Gilchrist, but he is still very far behind the record of Sri Lankan wicket-keeping great Kumara Sangakkara, who accumulated 10,000+ runs in both ODIs and T20Is.
He was dismissed on the last ball off the 49th over, with Williams accounting for the former India captain.
India never really got going, and seemed to be behind the eight-ball throughout the chase. But it never looked as if they were out of the game, with Dhoni almost staying till the end.
Pandya scored 20 runs and Jadhav 10 as the batsmen struggled to get runs on what was a slow and a sluggish pitch.

Earlier, all-rounder Hardik Pandya (3/40) and chinaman bowler Kuldeep Yadav (2/31) yet again proved very effective in the middle overs while Umesh Yadav (3/36) scalped three
batsmen later on in India's dominating bowling show.
Coming into the must-win match, West Indies elected to bat and were off to a steady start but lacked character for a flourishing finish against the visitors.
Openers Evin Lewis (35) and Kyle Hope (35) put on 57 runs in a steady start for the hosts before young Pandya broke the partnership by getting rid of the latter.
Kuldeep, who has looked impressive from the beginning of his debut, made life tough tough for the West Indies batsmen with his stock ball and googlies.
Lewis tried to open his arms, going for a drive off Kuldeep, but the ball turned a bit and went straight to captain Virat Kohli at mid-wicket.
With Pandya and Kuldeep bowling in tandem accurate lines, the hosts found the going tough. Lack of application from the home batsmen made the job easier for India.
Paceman Umesh Yadav also contributed in cleaning up the middle over by scalping three batsmen.
Once the openers departed it got worse for the West Indies, which needed a good partnership and a batsman, who could stay on the crease for a longer period.
The chinaman bowler struck for the second time when he deceived Roston Chase (25) in the air and the ball clipped the bails, leaving the team at 121 for there in 31.2 overs.
The hosts maintained a decent run-rate but now they needed to accelerate to present some challenge before the formidable batting line-up.
Pandya returned and dismissed wicket-keeper Shai Hope (25) by having him caught behind and soon Umesh Yadav had his first victim in rival captain Jason Holder (11).
Half the team was back in pavilion. The responsibility to get the side a fighting total was on Jason Mohammed and Rovman Powell.
However both of them departed soon. Powell, attempting to hit one hard from Umesh, miscued one to Ravindra Jadeja while Mohammed hit straight to Jadeja while slashing one from Pandya.
Umesh troubled the tail-enders Devendra Bishoo (15) and Ashley Nurse (4) with his fast and rising deliveries. One such ball hurried on to Nurse took an edge and Umesh caught it diving to his follow right