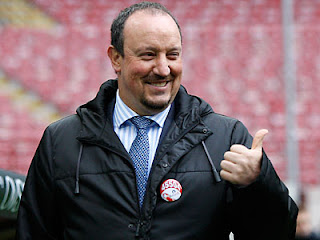 Former Inter Milan, Liverpool and Chelsea manager Rafael Benitez will return to Italy to take charge of Serie A club Napoli. "Rafa Benitez is the new manager of Napoli," club president Aurelio De Laurentiis said
Rafael Benitez replaces Walter Mazzarri who quit after the team finished second behind Juventus in Serie A this season to qualify for the Champions League. Mazzarri was in charge for just under four years, building a strong attacking side which twice qualified for the Champions League and won the Italian Cup in 2012

Note
Benitez was in charge of Inter for the first half of the 2010-11 season after replacing treble-winning Jose Mourinho. With the team lying a modest sixth in December of that season, the Spaniard's job was under threat, but he appeared to earn a reprieve when he led them to victory in the Club World Cup in Japan.
Benitez then angered Inter owner Massimo Moratti by demanding reinforcements and was sacked before Christmas.
He then remained out of coaching for nearly two years until Chelsea hired him to replace 2012 Champions League-winning Roberto Di Matteo in an interim capacity
Benitez ended a 7-month spell at Chelsea earlier this month by winning the Europa League and finishing third in the Premier League, thereby qualifying for the Champions League.
Posted by kmhouse at 3:40 AM