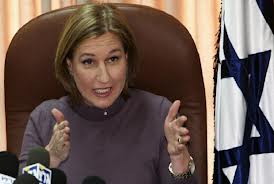 Mrs Livni, head of the centrist Hatnua party, will be justice minister and chief negotiator with the Palestinians.
The party has promised to push for a two-state solution to the Israel-Palestinian conflict. Hatnua (The Movement) won just six of 120 seats in the Knesset in the January 22,2013 polls.

Mr Netanyahu is in discussion with other parties on joining his government, after winning elections.

Questions remain about how Mrs Livni's appointment will affect his two largest potential partners: the centrist Yesh Atid, which has 19 seats, and the pro-settler Jewish Home party, which has 12.
Posted by kmhouse at 4:37 AM