The News of the World was a 168-year-old best-selling Sunday Tabloid Newspaper Published in the UK from 1843 to 2011, printing its last edition on 10 July that year. 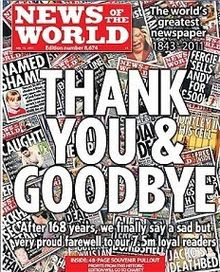 Originally established  by John Browne Bell, the Bells sold to Lascelles Carr in 1891; in 1969 it was bought from the Carrs by Rupert Murdoch'ss media firm News Ltd. Reorganised into News International, itself a subsidiary of News Corporation, it was transformed into a tabloid in 1984. News of the World was the Sunday sister paper of  'The Sun'.
The newspaper concentrated on celebrity based scoops and populist news.Its fondness for sex scandals gained it the nicknames " News of the Screws" and "Screws of the World".Sales averaged 2,812,005 copies per week in October 2010.

The editor Andy Coulson  resigned on 26 January 2007 over the 'royal phone tapping scandal'(the police laid charges against Clive Goodman, the News of the World's royal editor, and Glenn Mulcaire, a private investigator, alleging that they intercepted voicemail messages left for members of the royal household.. Both men were jailed in 2007)
On 7 July 2011, News International announced that the News of the World would be permanently closed that week, the last issue being produced on Sunday 10 July 2011. The closure was in response to the developing phone hacking scandal, after a private investigator allegedly hacked into the phone of murdered British teenager Milly Dowler, possibly interfering with the police investigation and causing distress to the girl's parents.
As a result of the scandal, James Murdoch, Chairman and Chief Executive of News Corporation, Europe and Asia, announced on 7 July 2011 that the 10 July 2011 edition of the paper would be the last.
On July 8.2011,former editor Andy Coulson was arrested by police investigating phone hacking and corruption allegations.On the same day ex-NoW royal editor Clive Goodman, jailed for phone hacking in 2007, was also arrested over similar corruption claims. jailed for phone hacking in 2007, was also arrested over similar corruption claims.
The News of the World  has a history that dates back to 1843 when its publisher was clear on what its readers wanted to read: crime, sensation and vice.  Priced at three pence, its first edition was out Oct 1, 1843. Publisher John Browne Bell's formula was fast, titillating news, with an emphasis on sensation and sex. 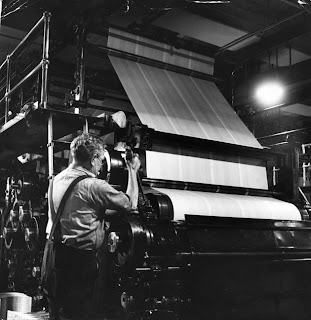 8th April 1917: Newspaper headlines in the 'News of the World' during World War I. 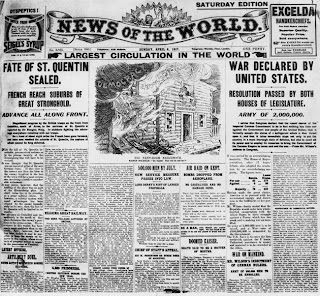 1938: Traffic in Brixton High Street, south London, spanned by a railway bridge on which the newspaper News of the World is prominently advertised. 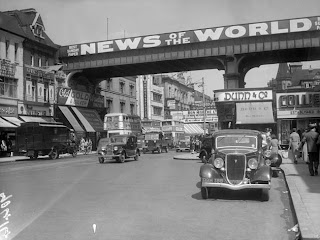