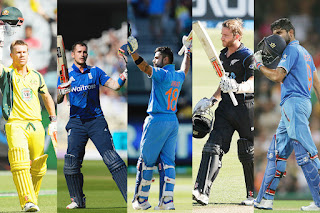 Player - David Warner
Runs -173
4s - 24
6s - 0
Team - Australia
Opposition - South Africa
Ground - Cape Town
Match Date - 12 October, 2016
A swashbuckling opener, Warner is known to take the opposition bowling to the cleaners. But this Cape Town knock was special. Chasing 327 was never going to be easy and the Aussies ultimately lost by 31 runs. But such was Warner’s dominance that evening that despite scoring a hundred in a winning cause, Rilee Rossouw lost the Man of the Match award to Warner. He cut, pulled and drove with elan and till the time he was at the crease – 48th over – South Africa skipper Faf du Plessis had his heart in his mouth. Despite winning the series 5-0, du Plessis made no bones about the fact that Warner had the Proteas on tenterhooks during his innings.
Player - Virat Kohli
Runs - 154*
4s - 16
6s - 1
Team - India
Opposition - New Zealand
Ground - Mohali
Match Date - 23 October, 2016
The master of chases, Virat Kohli once again showed his prowess during the third ODI of the 5-match series against the Kiwis. Chasing 285 and with the series level 1-1, Kohli once again rose to the occasion and played a blinder as India romped home with 10 balls to spare. Kohli did provide the Kiwis with a chance when Ross Taylor dropped a dolly with the batsman on 6. Post that, it was a chanceless knock from India’s Test skipper. While he had the perfect second fiddle in MS Dhoni, it was Kohli’s beautiful sense of building up the chase that made it a treat to the eyes. After 47 overs, India needed 23 runs off 18 balls. But the 48th over saw Kohli launch into Trent Boult and pick 22 runs. The rest as they say is history.
Player - Kane Williamson
Runs - 118
4s - 14
6s - 1
Team - New Zealand
Opposition - India
Ground - Delhi
Match Date - 20 October, 2016
After a whitewash in the Test series, New Zealand had lost the first game of the ODI series and it was important for them to make a statement. And Kane Williamson led from the front in the second ODI. Batting on the low and slow Kotla wicket is never easy, but Williamson looked like he was a man on a mission as he hit his first hundred of the tour and helped NZ pose a competitive 242. The best part about the innings was the way Williamson had paced his innings. He never looked to over attack and was happy to wait for the bad deliveries. In the end, he finished with a strike-rate of 92.18, considered average in the modern era, but it was enough on a track that has never been known to be batting-friendly. NZ won by 6 runs and a delighted Williamson was happy to collect the Man of the Match award.
Player - Manish Pandey
Runs - 104*
4s - 8
6s - 1
Team - India
Opposition - Aiustralia
Ground - Sydney
Match Date - 23 January, 2016
Chasing 331, India had lost Virat Kohli for just 8 and when Rohit Sharma followed for 99, the writing was on the wall. Even though Rohit and Shikhar Dhawan (78) had put on 123 for the opening wicket, it looked like it would be a case of so close yet so far. But as they say, cometh the hour, cometh the man. Playing in only his fourth ODI, Pandey played a mature knock to see the team home. Pandey looked in control right through the innings. Needing 13 off the last over, India looked safe with MS Dhoni hitting a six off the first ball. But he was dismissed of the second and that is when Pandey took over, hitting a boundary and running a double as India won with two balls to spare.
Player - Alex Hales
Runs - 171
4s - 22
6s - 4
Team - England
Opposition - Pakistan
Ground - Nottingham
Match Date - 30 August, 2016
Trent Bridge has been known to produce some high scoring ODIs over the years. But not many people would have thought that the highest ODI score ever would come on the same ground against a Pakistan side which boasted of top quality bowlers like Mohammad Amir, Wahab Riaz and Yasir Shah. But Alex Hales was a man possessed that evening. Every ball had a boundary written over it as he looked like he was training in the nets. Despite being an ODI, Hales’s knock had T20 written all over it. He not only broke the backbone of the Pakistan bowling with his aggressive display at the top, but also provided the perfect platform for Jos Buttler to end the innings on a high. In the end, England won by 169 runs and Hales was rightly named Man of the Match.
Posted by kmhouse at 9:55 PM