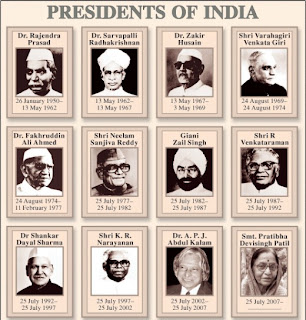 The President of India is Head of State and Commander in Chief of the Armed Forces and the first citizen of India.The President is elected by members of Lok Sabha;Rajya Sabha and the State Legislative Assemblies.The President may remain in office for a tenure of five years, as stated by article 56, part V, of the constitution of India.


7 Presidents have been members of a political party before being elected. 6 of these were active party members of the INC.The Janatha Party has had one member,Neelam Sanjiva Reddy, who later became President. 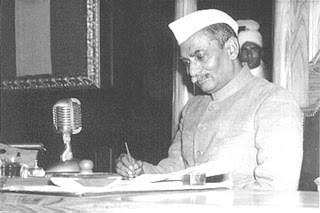 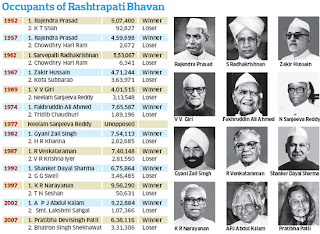 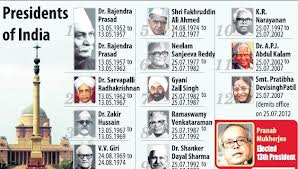 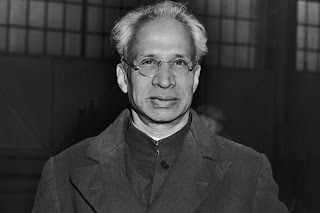 2)Dr S Radhakrishnan (1888-1975): Term (May 13, 1962 - May 13, 1967) One of India's most influential scholars of comparative religion and philosophy, Dr Sarvapalli Radhakrishnan is credited with building bridges between the East and the West by showing that the philosophical systems of each tradition are comprehensible within the terms of the other.
Among the many honours he received were a knighthood (1931), the Bharat Ratna (1954) and the Order of Merit in 1963. Sept 5, his birthday, is celebrated as Teachers' Day in India. 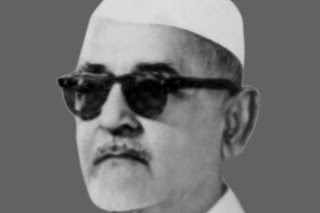 3)Dr Zakir Husain (1897-1969): Term (May 13, 1967 - May 3, 1969) An educationist and thinker par excellence, Dr Hussain founded the Jamia Millia Islamia and was the Vice-Chancellor of the Aligarh Muslim University. The first elected Muslim president of India, he was awarded the Bharat Ratna in 1963 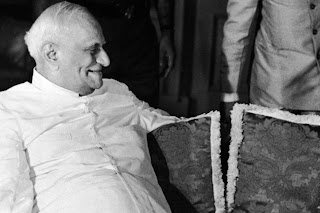 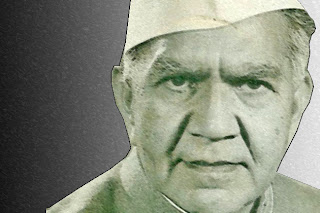 5)Dr Fakhruddin Ali Ahmed (1905-1977): Term (Aug 24, 1974 - Feb 11, 1977) Picked for the presidency by Indira Gandhi in 1974, he became the second Muslim to be elected to the post. He is known to have issued the proclamation of Emergency by signing the papers at midnight after a meeting with Indira Gandhi the same day. 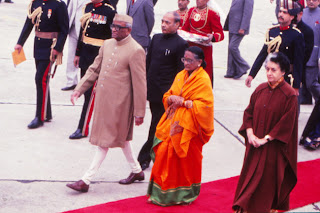 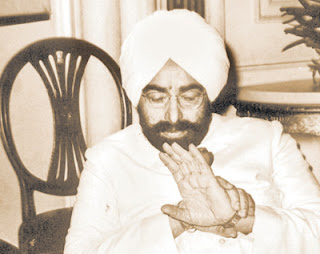 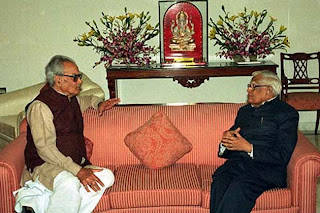 8)R Venkataraman (1910-2009): Term (July 25, 1987 - July 25, 1992) Venkataraman had the unique distinction of working with four Prime Ministers, and appointing three of them: V P Singh, Chandra Shekhar and P V Narasimha Rao, during his five-year term, which saw the advent of coalition politics in India.
Seen in the picture with veteran BJP leader Bhairon Singh Shekhawat, Vice-President of India (2002-07) 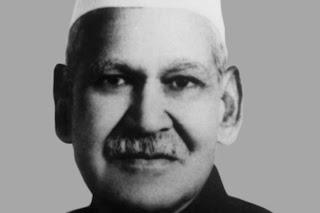 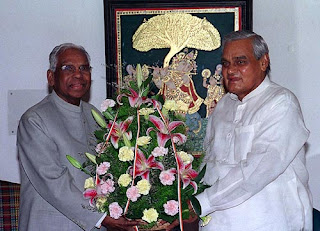 10)K R Narayanan (1920-2005): Term (July 25, 1997 - July 25, 2002)
A magazine described K R Narayanan's journey from a 'chetta kudil' (meanest hut) to Rashtrapathi Bhavan as a saga which has no parallel in India and is certainly more remarkable than that of Abraham Lincoln from a log cabin to the White House. Known as an activist President, his interventions during the Gujarat pogrom of 2002 is unparalleled by the otherwise non-partisan standards of the Rashtrapati Bhawan.
Seen here with the BJP veteran Atal Behari Vajpayee. 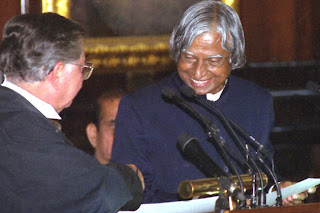 11)Dr A P J Abdul Kalam (born 1931): Term (July 25, 2002 - July 25, 2007)
Avul Pakir Jainulabdeen Abdul Kalam's popularity as President is unparalleled. Being a bachelor, he literally threw open the doors of the Rashtrapati Bhawan for people from all walks of life, and of course children. 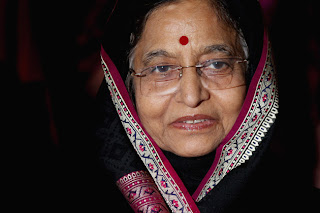 12)Pratibha Patil (born 1934): Term (July 25, 2007 - till date)
Pratibha Devisingh Patil created history by becoming the country's first woman President. Patil surprised the nation by being chosen the UPA-Left's consensus candidate for the Presidential election. Although hers was a largely insignificant presidency, Patil's foreign tours that allegedly cost the public exchequer a whopping Rs 205 crore created a lot of controversy during her tenure.

There have been 12 Presidents of India as of June 2012 since the introduction of the post in 1950.